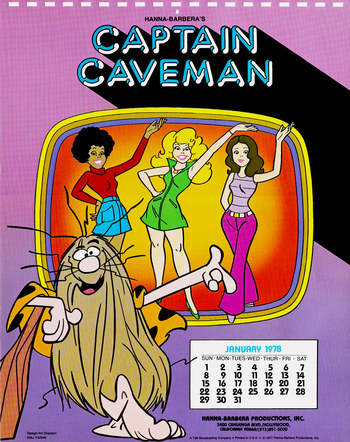 Captain Caveman and the Teen Angels was introduced as part of Scooby's All-Star Laff-A-Lympics on ABC in 1977. When not competing on Scooby-Doo's team, Cavey and his trio of beauties solved mysteries in yet another variation of the Scooby format. Cavey, a caveman Super Hero frozen in a block of ice until thawed in the 20th century by the Teen Angels, kept many gadgets and live dinosaurs inside his fur. He also possessed superhuman strength, and (thanks to his club) could even fly; those powers were prone to giving out at unwelcome occasions. The Teen Angels are (left to right): smarty pants leader Dee-Dee Skyes, flirtatious Taffy Dare, and nervous wreck Brenda Chance.

Captain Caveman and the Teen Angels provides examples of:

The Captain Caveman segments on The Flintstone Comedy Show provide examples of:

The Captain Caveman segments on The Flintstone Kids provide examples of: