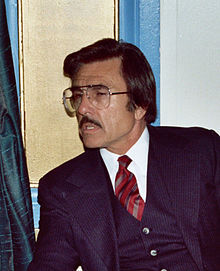 Gary Owens (born Gary Bernard Altman; May 10, 1934 – February 12, 2015) was a disk jockey and voice actor known for his deadpan, baritone voice, his The Comically Serious roles, his habit of cupping his hand to his ear while announcingnote He did this in homage to early radio announcers, who had to do this to tell how they sounded to the audience. He would often give funny and ridiculous reasons for doing this when asked about it., and his Catch Phrases "Beautiful downtown Burbank", "This is Gary Owens, friend of those who want no friends, going places and losing things.", and "Hello, and also hi; but not necessarily in that order." To an extent, another catchphrase was "Bring me chopper backup!"

He was a gifted punster with a fondness for Word-Salad Humor, which his earnest deadpan delivery made even more hilarious. He often threw a Perfectly Cromulent Word into his radio announcing, dropping such phrases as "We'll be back in just a krenellemuffin" and "I'd like to thank my engineer, Wayne Doo, for creebling at the turntables." As a radio DJ, he urged listeners to send in for "yours", which turned out to be a postcard from him with the word "Yours" written on it. Despite his ability to navigate any amount of silliness with a straight face, he was caught at least once in a famous example

of Corpsing, breaking up into hysterics upon realizing that the sponsor of the ad he was reading was a hemorrhoid cream.

His sons Christopher Dane Owens (of "Shine on Me" fame) and Scott Owens are a movie producer and production manager respectively.

He passed away at age 80 from complications involving Type 1 Diabetes, which he had first been diagnosed with at age 8.