Music / Shine on Me 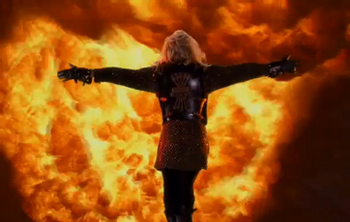 Yes, this is what the entire video looks like.
"Watching this video, you will wonder, briefly, if Chris Dane Owens "means it". This is an ungenerous thought—dismiss it. You may also wonder why "Shine On Me" is modelled on early ABC and Spandau Ballet and padded out with an unnecessary layer of loud guitars. Irrelevant. What you need to know is that Mr. Owens will live forever—until the dragons rule the earth again (or the first time, whatever)—and that you are going to watch this video more times than you can imagine. You may dream of this video, but the dream won't be as good because it won't be this video."
—The New Yorker
Advertisement:

"Shine on Me" is a song by Chris Dane Owens (son of Laugh In announcer Gary Owens) from his album Blue Stone. An 80s love song made in 2008, under most circumstances it would just be thrown in the Guilty Pleasures pile without another look. But that was before Owens, armed with a budget that he's too embarrassed to admit, footage from other movies, a green screen, Robert Short

Was Cracked.com's #1 for the "6 Worst Professional Music Video" (of course Swaim ends up saying "Who am I kidding, this video is fucking amazing" at the end) and won The New Yorker's "Video Of The Year" award.