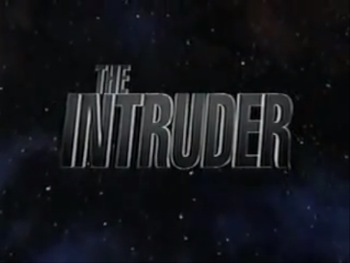 "You affect the outcome."
"Something is invading Toonami. Your host, TOM, and the Absolution are in for the fight of their lives, and in the end, only one will be left standing."
—Peter Cullen
Advertisement:

The Intruder is an original mini-series that aired on Toonami throughout the month of September of 2000, consisting of 5 episodes ranging roughly 2 to 3 minutes in length.

TOM is having a conversation with SARA, the A.I. of the Absolution, when SARA receives an intruder alert. The Clydes are sent out to investigate, and discover that the hull of the ship has been breached. TOM, armed with a laser pistol, goes on foot to find out who has invaded the ship.

Referred to as a "Toonami Immersion Event" (or T.I.E., for short), the mini-series served as a transition between eras, switching TOM from a pudgy Bomberman-esque model voiced by Sonny Strait to a leaner and more muscular model voiced by Steve Blum.

. A sequel, The Intruder II, premiered in November of 2015, airing throughout to December 19th.

The Intruder provides examples of: