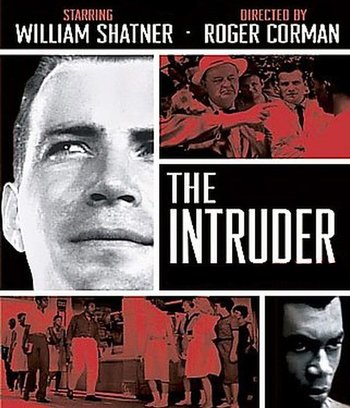 The Intruder is a 1962 Roger Corman film based on the 1959 novel by Charles Beaumont, who also wrote the screenplay.

Jewish Canadian actor William Shatner stars as Adam Cramer, charming cross-burner and zealously patriotic American anti-Semite, who has come to the fictional Southern town of Caxton intending to help its residents fight school desegregation, which is essentially indistinguishable from turning the racism Up to Eleven.

The Intruder contains the following tropes: