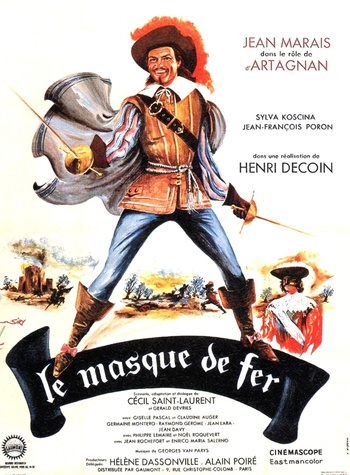 The Iron Mask (Le Masque de Fer) is a 1962 French swashbuckler film directed by Henri Decoin. It is loosely based on Le Vicomte de Bragelonne by Alexandre Dumas.

In 17th century kingdom of France, Henri (Jean-François Poron), a mysterious prisoner wearing an iron mask, escapes from the isle of Sainte-Marguerite. It turns out he is the hidden twin brother of King Louis XIV (also played by Jean-François Poron), and a bunch of conspirators want to use him to replace the king and take over the kingdom. But Henri wants none of it and only wishes to escape as far as possible with Isabelle de Saint-Mars (Claudine Auger), the woman he loves. With her help, he manages to pull it off.

Enters D'Artagnan (Jean Marais), who was tasked by the Cardinal Mazarin (played by Enrico Maria Salerno) to bring the Iron Mask to Paris. He must now solve this mess.

The Iron Mask provides examples of: