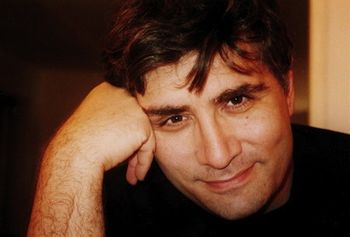 Gee, Mr. LaMarche, what do you want to do tonight?

The same thing we do every night, Paulsen... try to take over the world!

Yup, Canadian-born Maurice LaMarche (born March 30, 1958) is best known for the voice of The Brain in Pinky and the Brain. In creating that voice, LaMarche said he looked at a picture of the character and immediately thought of Orson Welles, although the character wasn't modeled after Welles at all, and he made use of his signature impersonation of Welles as a result — many Pinky and the Brain episodes are nods to Welles' career, actually. The role also earned LaMarche an Annie Award.

He also has roles in many commercials, including (since 2009) that of the narrator for Lexus TV ads and Toucan Sam in the Froot Loops commercials after Paul Frees' death in 1986.

Some of Maurice LaMarche's more prominent roles include:

Gee, Mr. LaMarche, what do you want to do tomorrow night?

The same thing we do every night, Paulsen...Try to take over the—

Stingers do not work that way! Good night!

Example of:
Tampering with Food and Drink