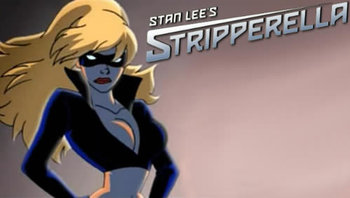 Stripper by night. Superhero later at night.
"Look out crime! I'm gonna take a bite out of you. But... not in a way you're gonna find... pleasurable."
— Stripperella
Advertisement:

Stripperella (2003-2004) was an adult-oriented, animated television series created by Stan Lee as a parody of the superhero and Spy Fiction genres. It aired on the newly-created Spike TV network in a short-lived Adult Swim-style line-up that included Gary the Rat, and The Ren & Stimpy Show.

The main character (voiced by and based on Pamela Anderson) is a stripper named Erotica Jones, who secretly works as crimefighting superheroine/secret agent Stripperella. Despite having respectable ratings for its time slot, the show was canceled at the end of the first season due to Creative Differences and a lawsuit filed by a stripper who said it was all her idea.