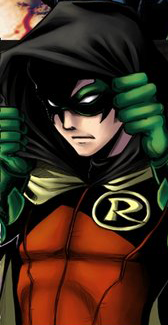 Thanks to the magic of creators cutting corners to save time and money, a character's irises suddenly disappear when he puts on a mask. In Comics and Western Animation, this is all but omnipresent, and has been since around 1950.

Common reasons for this design include making characters appear mysterious and/or threatening. And then some simply do it for Rule of Cool.

Note: Characters who have this incorporated into the design of their masks when it is off (e.g., Spider-Man and the Clone Troopers) or already have Monochromatic Eyes do not count for this trope.