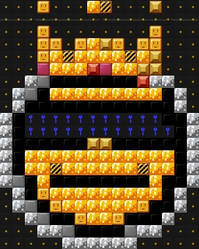 Everybody Edits, retroactively known as Everybody Edits Flash, is the first installment of the Everybody Edits series of online Level Editors with Drop-In-Drop-Out Multiplayer. It began in 2010, when Danish game developer Chris Benjaminsen made a simple game and would continue to expand on it.

Smileys and visual tweaks could be bought with energy or real money. Energy could also be used to buy more blocks used in worlds, or worlds themselves. There were also collectables found through other means, such as finding rare magical coins, Holiday Mode exclusives, or sending a postcard to the staff.

The game grew, and grew, until the game had hundreds of blocks and smileys to play around with. Players had found Emergent Gameplay through the game's many features, and made a wide variety of levels to play in.

In 2015, the 2.0 update brought campaigns and even more new features. In campaigns, high-quality worlds approved by staff members are strung together with a common theme.

The game has had a complex and rough development history over the years. In December 2020, the game had to be retired because of Adobe Flash's deprecation, and the game was given one final countdown.

Everybody Edits Flash contains examples of: