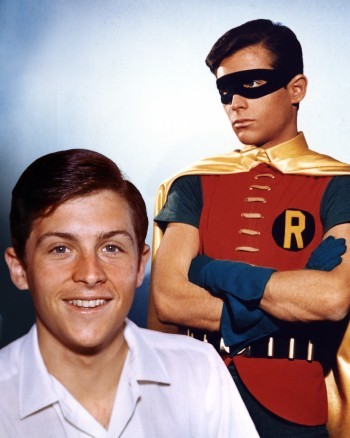 Holy typecasted role, Mr. West!
"Our characters were antiseptic but we weren't. And if you remember what we did on 'Batman', as the scripts were written very funny, we played them very straight."
Advertisement:

Thanks to training from his father, who operated a traveling ice show, he was considered the world's youngest professional figure skater at age two. He grew up reading superhero comic books and was a fan of The Adventures of Superman. In high school, he was a football player, track star, wrestler, member of the chess club, and he became a martial artist. When he began his acting career, he decided to change his name to Burt Ward, Ward being his mother's maiden name, as he felt it would be easier for fans to say and remember.

In Batman, he was required to do his own stunts because Robin's Domino Mask would make hiding a stunt double's face harder and the studio wanted to save money by not having to hire another stunt double. This landed him in the hospital several times. In addition to his acting career, he was briefly a singer. He bonded with his costar Adam West, saying he saw him as a surrogate father. They would costar in several projects and remained friends until West's death.

Sadly, he found himself typecast and it was difficult for him to find acting roles other than Robin. In June 1995, he wrote an autobiography called Boy Wonder: My Life in Tights.

While his role as Robin overshadowed most of his career, it should be noted that during the filming of the Batman TV series, he once shared an apartment neighborhood with the martial arts legend Bruce Lee (who guest starred for several episodes as Kato) and aside of eventually becoming best friends, the two sparred a few times (Yep, Burt Ward fought Bruce Lee a few times and generally could keep up).

Over the years, he's competed on a few game shows like Family Feud and The Hollywood Squares. He also founded a dog rescue charity specialising in larger breeds, Gentle Giants Rescue and Adoptions.

In 2019, it was revealed that he would take part to the Arrowverse crossover event Crisis on Infinite Earths at the end of the year.