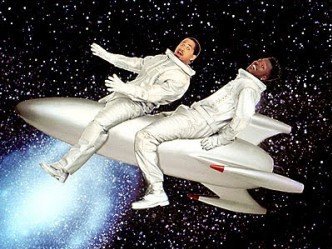 One of the first sitcoms UPN ever aired.Two 23rd century black guys from the ghetto get into misadventures in space. They travel in the "Space Hoopty", a cheap, flying low-rider controlled by a Sassy Black Computer.
Advertisement:

This Sitcom, in the name of comedy, ignored most of the known laws of astronomy, including the rule that you can't breathe in a vacuum.