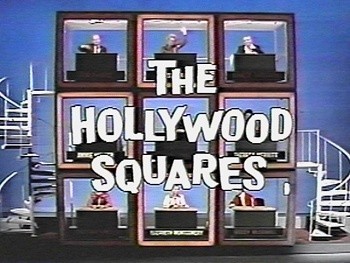 "One of these stars is sitting in the Secret Square, and the contestant who picks it first could win a prize package worth over $XX,000. Which star is it?"
"The areas of questions designed for the celebrities and possible bluff answers are discussed with some celebrities in advance. In the course of their briefing, actual questions and/or answers may be discerned by the celebrities."
—Kenny Williams, reciting the famous legalese during the ending credits of the original version.
Advertisement:

Love child of the Game Show and the Panel Game, produced by Merrill Heatter and Bob Quigley for NBC and syndication from 1966 to 1981. Peter Marshall, "the master of The Hollywood Squares", played host to nine celebrities and two contestants. The celebrities were seated in an oversized Tic-Tac-Toe grid; the contestants, Mr. X and Miss Circle, agreed or disagreed with the stars' often comical and bawdy answers to esoteric questions.

Infamous for featuring stars that were past their prime. The daytime run ended in 1980 due to the machinations of NBC's Fred Silverman, who hated the show (partially because he loathed game shows in general, but mainly because he'd passed up the Squares when they were in development at CBS, and was obviously not happy that it had hit it big for NBC) and ultimately succeeded in killing it (mainly by switching the timeslot around a lot). The 1980–81 syndicated season, which became a daily show, taped in Las Vegas (at the now-defunct Rivera), and was ultimately the death knell for the Marshall era due to various issues. Shortly afterwards, Filmways (which had acquired Heatter-Quigley in the late 60s) merged with Orion Pictures, resulting in their stewardship over the franchise ofr the rest of the decade.

The show was brought back multiple times after, first as a mashup with Match Game called The Match Game-Hollywood Squares Hour, which lasted from 1983 to 1984 on NBC; it didn't last long due to various reasons, including not having Peter Marshall as host of the Squares portion (being replaced by Jon Bauman, Bowzer of Sha Na Na) and formatting issues on the part of Mark Goodson (who didn't want to provide the Squares celebrities with any bluff answers, which led to most questions in the Squares segment being true/false or multiple choice).

Orion brought the show back again as The New Hollywood Squares for syndication in 1986; John Davidson, who had substituted for Paul Lynde on the daytime panel, emceed; this run came to an end in 1989. Shortly afterwards, Orion went bankrupt and sold the format to King World in 1991.

After a few false starts during the decade, another syndicated revival premiered in 1998, now produced by Whoopi Goldberg (who also served as center square) with Tom Bergeron hosting. Whoopi left the show in 2002, and it was given a cosmetic overhaul that year, with a floating "H2" present in the new logo and Henry Winkler now onboard as producer. Ultimately, this run ended in 2004.

While serviceable, the show didn't live to see 2013, but VH1 revived the series on March 13, 2017, allowing it to run for three more seasons until September 17, 2019. Nashville Squares, another music-themed spinoff with a Country/Western theme, premiered on CMT on November 1, 2019, with Bob Saget hosting. This iteration lasted until November 29 of the same year.

The format has two Market Based Titles: Celebrity Squares on ITV and Personality/All-Star Squares on Australia's Network Ten. Obviously, these shows are named that because Hollywood would refer specifically to America there.

Gilbert Gottfried calls those who answer incorrectly fools in an incredibly hammy way.

Example of:
You Fool!

Gilbert Gottfried calls those who answer incorrectly fools in an incredibly hammy way.