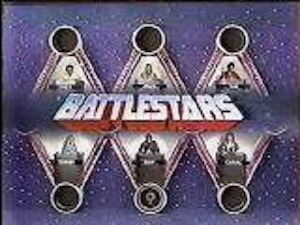 Game Show created by Merrill Heatter of The Hollywood Squares fame and hosted by Alex Trebek, which ran for six months on NBC in 1981-82 followed by a few more months in '83.
Advertisement:

Battlestars bore a striking resemblance to Squares, except that it had only six celebrities who sat in triangles. Each celebrity was surrounded by three numbers forming a triangle around them. A randomizer selected one of the numbers, which corresponded to whichever celebrity would be asked the question. Also unlike Squares, the questions offered two possible answers. If a player "captured" all three numbers surrounding a star, they then had to "capture" two more in a similar fashion to win $500 and the game.

This show is not connected to either the original Battlestar Galactica or its reimagined version.