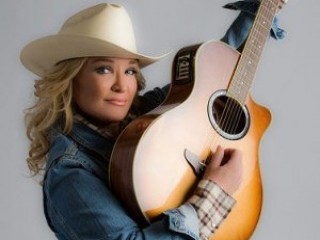 Popular and long-lasting Country Music singer who began when she was only 13.

Tanya Denise Tucker (born October 10, 1958) began singing as a small child, and after her family moved to Vegas, she submitted a demo tape to Columbia Records. Initially, Tucker was going to record "The Happiest Girl in the Whole USA", but that song instead went to Donna Fargo. Tucker's breakthrough debut instead ended up being "Delta Dawn". The song was a major crossover hit, and gave her enough momentum for three Columbia albums, all produced by Billy Sherrill.

The next leg of her career was spent on MCA Records between 1975 and 1982. While she had some hits in this timespan, including "Lizzie and the Rainman" (her biggest pop hit), "San Antonio Stroll", and "Here's some Love", her sales and chart performances were slumping. In addition, she had become romantically involved with the much older Glen Campbell, and had begun abusing alcohol and cocaine. Her career went on hiatus from 1983 to 1986, when she returned on Capitol Records to begin a new label relationship that would last for the next decade.

It was during her tenure with Capitol that Tanya re-established herself as a confident adult country singer, avoiding most of the travails of former child stars. Her first few Capitol albums notched such big hits as "I Won't Take Less than Your Love" (featuring Paul Davis and Paul Overstreet), "If It Don't Come Easy", "Strong Enough to Bend", "Down to My Last Teardrop", and "Two Sparrows in a Hurricane". Given her increasing age and a shift toward more pop-oriented country by the end of the decade, she exited Capitol and has only issued two more albums since: Tanya was self-released in 2003, and the mostly cover song album My Turn in 2009. Despite the lack of new material, she has also continued to tour. She did make a comeback in recording with her 2019 album, While I'm Livin', which did become commercially successful and got awarded a few Grammy awards.

Tucker's early period was defined mainly by energetic rock-influenced country, often with dark and gritty themes that belied her age. Her material remained largely mature as she aged, constantly becoming more refined and polished without losing the grit of her naturally raspy voice.

Her older sister LaCosta also had minor success as a country singer not long after she did.