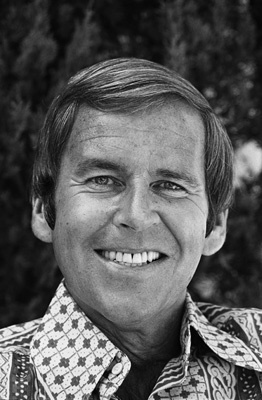 Paul Edward Lynde (June 13, 1926 – January 10, 1982) was an American comedian and actor, best known for occupying the center square on The Hollywood Squares. He also appeared on numerous TV sitcoms (most notably in the recurring role of Samantha's mischievous Uncle Arthur on Bewitched), did some animation voice work, and was a recurring guest on the Donny And Marie variety show.

With a Camp Gay persona (despite never publicly coming out during his lifetime, he pretty much occupied a Transparent Closet)note The closest he came to outing himself was when he snidely quipped, in response to a query from a fan on the question of when he would finally settle down with a nice girl, "Have you been living in a cave?", Lynde was also a rather Large Ham.

Lynde's distinctive vocal affect (nasal, halting, and sing-songy) lended itself very well to a side career in voice acting, and has often been imitated in many productions after his death, including Seth MacFarlane's portrayal of Roger the Alien on American Dad!, Jeff Bennett's portrayal of Peppermint Larry on The Marvelous Misadventures of Flapjack, and John Stephenson's portrayal of Wilford Wolf on The Kwicky Koala Show. Steve Carell portrayed "the spirit of Uncle Arthur" in a fantasy sequence in the film remake of Bewitched, performing a spot-on Lynde imitation often regarded as one of the highlights of the film.

Works with articles on this wiki