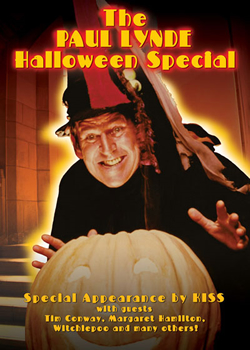 Aired only once on ABC in 1976, the musical comedy special is noted for a number of its highlights, including Margaret Hamilton reprising her role as the Wicked Witch of the West for the first time in nearly 40 years, as well as the first primetime television appearance of the then relatively unknown band KISS.

The basic plot of the special has Paul Lynde going away for a rest period, so as to avoid all of those pesky trick-or-treaters on Halloween night. His housekeeper (Margaret Hamilton) takes him to the home of sister (Billie Hayes reprising her role of Witchiepoo); it is here that Paul learns the two are, in fact, witches, and their real reasons for bringing him was to have a well-known and loved TV personality help soften the image of witches, and show that they're not really bad after all. In exchange for his help, the two grant Paul Three Wishes; after they grant his first two wishes (to be a rhinestone trucker, and a romantic sheik), Paul is convinced that witches are good, and decides to use his last wish on them, granting them their wish to go to a disco rave.

In additional to Margaret Hamilton and Billie Hayes, the special also includes appearances by Billy Barty, Tim Conway, Roz Kelly, Florence Henderson, Betty White, and Donny & Marie Osmond. Because a majority of the appearances in this special are made by Krofft actors (a number of Krofft crewmembers also worked on it), there has been a common misconception that this special is a Sid & Marty Krofft production, however, the Kroffts had absolutely nothing to do with its production.

For many years, it was believed that no master copy (or any copy for that matter) of this special existed, until thirty years later, when a copy was found, and the special was given a DVD release in 2006.

This special contains examples of