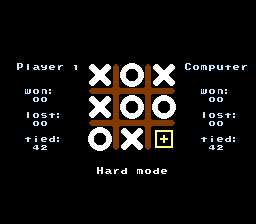 Can't get 3 in a row. Can get 43 tie games in a row.
(Super NES version)
Tic-tac-toe, also called tick tack toe, or noughts and crosses/Xs and Os as it is known in the United Kingdom, Australia and New Zealand, is a pencil-and-paper game of unknown origin. Two players, X and O, take turns marking the spaces in a 3×3 grid. The X player usually goes first. The player who succeeds in placing three respective marks in a horizontal, vertical, or diagonal row wins the game. If the board fills up before anyone accomplishes this (which is very likely to happen between players with any experience), the game is a draw.
Advertisement:

The first (or second) video game, OXO, is pretty much this in video game form. It was also the basis for Tic-Tac-Dough and The Hollywood Squares, as well as the Secret "X" game on The Price Is Right.