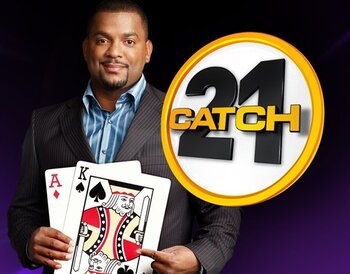 It's all in the cards!
Advertisement:

Merrill Heatter-Bob Quigley Game Show which premiered on CBS in 1972, on the same day as The Joker's Wild and The Price Is Right. Two couples played blackjack while answering knowledge questions asked by host Wink Martindale. Very few episodes are known to have survived.

Martindale returned as host of the successor series, Las Vegas Gambit, on NBC in 1980-81 (following a 1979 pilot). A decade later, Bob Eubanks was the host of a Gambit pilot for ABC in 1990, with solo contestants and a different question format; ABC rejected it in favor of a Match Game revival. GSN attempted a revival in 2002 with three solo players and Ron Pearson as host under the name Casino

, but turned it down for Cram and Friend or Foe.

With some slight tweaks, the essence of the Casino format finally made it to Game Show Network from 2008-11 as Catch 21. The show was hosted by Alfonso Ribeiro and marked the return of not only Gambit, but Heatter, who had not gotten a game on the air since The Last Word ended 18 years earlier. Game Show Network announced a 2019 revival, again hosted by Ribeiro with Whitney Carson as the dealer.