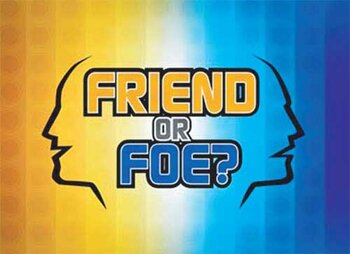 "Trust me."
The only words in the title music.
Advertisement:

GSN Game Show described by its host Kennedynote perhaps best known as a host on MTV during the 90s, full name Lisa Kennedy Montgomery as "the test of knowledge and trust". Three teams of two had to agree on a correct answer to a multiple-choice question to build up their Trust Fund. It was mostly seen as GSN's answer to The Weakest Link.

The game is set up in three rounds. After each round, the lowest scoring team's game ends, and they must go to the "Trust Box" to determine how the money was given to the two members. After each member has been given a few seconds to plead his case, they each secretly vote Friend or Foe:

Everyone "looking out for Number One" is a policy that hurts everyone; in order for at least one in a pair to get any cash, someone has to be at the other's mercy... but choosing "Friend" won't maximize a contestant's payout. Assuming a $1,000 Trust Fund, choosing "Friend" means you'll leave with $500 or nothing, while choosing "Foe" means you'll leave with $1,000 or nothing; choosing "Foe" is the best decision personally, but collectively it's the worst decision. This is based on a well-known example of Game Theory called the (iterated) Prisoner's Dilemma.