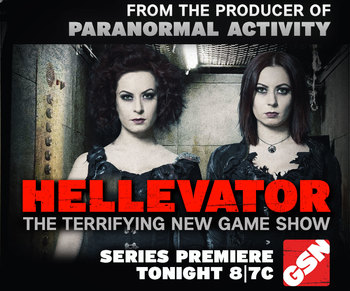 Hellevator is a horror game show that premiered on GSN on October 21, 2015, and is from the producers of Paranormal Activity. It is hosted by the Soska twins, who oversee a "slaughterhouse" from a hidden control room as a team of three players walk through a dusty office and onto the "Hellevator". Once onboard, they each individually take on three floors of horror challenges following a weekly-changing narrative that increase in difficulty and worth ($5,000, $10,000, and $15,000). If a player fails a challenge, that person becomes a "victim" of it, is eliminated from the game, and is not seen again for the rest of the episode. Any survivors confront the "Labyrinth" on the bottom floor where another $20,000 can be won, meaning a possible total of $50,000 for a perfect game ($55,000 in the fifth aired [first taped] episode).

The second season premiered on October 7, 2016, and ran for four episodes. Each legend is based on one of the Seven Deadly Sins, with the three challenges based on a different one. The money for the challenges was reduced to $2,000, $3,000, and $5,000. The team brings a fourth player along who does not participate in the challenges, but is placed in a cell in an area called the "Inferno" at the start of the game. Any eliminated players are placed in this cell as well. The survivors then have to complete a series of shorter challenges to try to free their teammates. Up to $40,000 is available in the Inferno, so there's still $50K on the table for a perfect game. If the team fails the Inferno Run, their winnings would be forfeited and each team member will be trapped in a separate room and "tortured" in the Slaughterhouse.