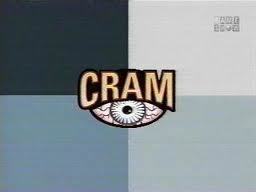 (CRAM!) 24 hours ago, four brave souls were locked up in our Hollywood & Highland Cramatoriums. Deprived of sleep, our two teams were each given a huge pile of ridiculous information to study. Trapped in a Hollywood storefront all night, they had to resist the urge to sleep and cram as many facts as possible into their exhausted brains. (CRAM!) No sleep, no privacy, no mercy. Now we're going to find out what they've learned; there's 10 grand on the line.
Advertisement:
It's time... to... CRAM!
— The opening, provided by host Graham Elwood

GSN Game Show which aired from January to September 2003 in which two teams were sequestered for 24 hours in a storefront at Hollywood and Highland (the "Cramatorium"). There, they were forced to "cram" factoids, jokes and trivia on which they would be quizzed throughout the show while performing various stunts. The game's three rounds included ranting while walking in an oversized hamster wheel, listing 12 items while competing in a sundry stunt round, and having the team members work an exercise bike or rowing machine while answering riddles. Points were awarded for right answers, and deducted for wrong answers or passed questions. The winning team received $1,000, while the losers got $500.

At the end, the winning team members were placed in onstage beds and blindfolded, with the lights dimmed, while "Miss Pickwick" read various bizarre facts in a relaxing tone. Upon the return from commercial, the contestants were then awakened (in a loud and alarming fashion, though if they hoped to win, they shouldn't actually have been sleeping) and given 60 seconds to stand on a balance beam, peg, or pair of surfboards while answering questions on Miss Pickwick's facts. If either contestant lost their balance, Graham would stop reading the current question and start over once they were back in place. Correct answers moved the team up a five-step scale; wrong answers moved them down a step, and getting to the top of the scale won $10,000; losers got $100 per step achieved (based on their final score). Win or lose, the winning teams were placed in comfy chairs and given coffee.

The show added a larger variety of stunts in Season 2 (which began June 15, 2003) and changed some rounds' time limits. Other Season 2 changes included a new assistant named "Dr. Damnearkilter" to taunt the contestants, and special celebrity editions every Monday.