Music / The Black Saint and the Sinner Lady 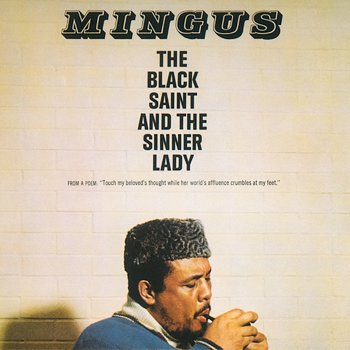 "Touch my beloved's thought while her world's affluence crumbles at my feet."
Advertisement:

The Black Saint and the Sinner Lady is a studio album by American jazz musician Charles Mingus, released on Impulse! Records in 1963. Comprised of six suites composed by Mingus that were initially conceived as a ballet, Mingus recorded the album shortly after he was discharged from Bellevue Psychiatric Hospital, a fact furthered by the liner notes containing a letter / review from his then psychotherapist, Dr. Edmund Pollock.

The record is considered a New Sound Album for Mingus and an incendiary release for Jazz music as a whole, with its genre-defying composition and innovative use of overdubbing. The three-way brass dialogue of trumpets, trombone and tuba, high flying reeds and a sturdy rhythm section balance delicate Andalusian modes and Duke Ellington-esque melodies, the ensemble frequently bursts into a cacophony of collective improvisation on par with jazz giants such as John Coltrane or Ornette Coleman.

It is because of this, the record is considered to be Mingus' masterwork alongside his prior record, Mingus Ah Um.

Stop! Look! And Listen To The Tropes!