Series / Sale of the Century 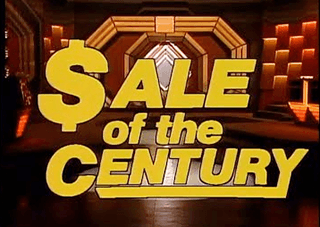 "Today on America's BIGGEST bargain sale, we're offering a Datsun 300ZX, valued at $26,194 for only $530! Cash and prizes worth over ONE HUNDRED THOUSAND dollars for only $750! TWO of the incredible bargains on...SALE OF THE CENTURY!"

Game Show that originally ran on NBC from 1969 to 1973, followed by weekly syndication for the 1973/74 season. The show was created by Al Howard two years after the conclusion of another program of his, Supermarket Sweep on ABC. It was originally hosted by Jack Kelly, who was replaced by Joe Garagiola in 1971. The show was directed by Paul Alter. Three solo contestants (from April 1973 to September 1974, two husband-wife teams) accumulated small amounts of money by answering general-knowledge questions. At certain points in the game, the player/couple in the lead could spend part of their score on ridiculously discounted prizes. Unlike most games, Sale allowed all players to take home whatever money and prizes were credited to them, regardless of the outcome.

During the show's run in the United Kingdom (1971-83), Sale was purchased by Australian producer Reg Grundy, who made some tweaks to the format (primarily the addition of the Fame Game, where the host read off clues to the identity of a famous person, place or thing; answering correctly gave the contestant a chance to pick up more prizes, cash for their score or to pocket, and other things), and debuted a version in his native country, beginning transmission on the Nine Network on July 14, 1980. note (Grundy had already produced a similar show called Great Temptation in Australia from 1970 to 1976. Its host, Tony Barber, returned to helm Grundy's Sale until 1991.)

After this became a major success as well, he took it to NBC with Jim Perry as host. This era ran on NBC from 1983 to 1989, with a concurrent syndicated version airing daily from January 1985 to June 1986 (also hosted by Perry). The Australian version, meanwhile, continued until 2001. The United Kingdom has also had two revivals, one from 1989 to 1992 on Sky One (as part of its initial lineup with the launch of its service on the Astra Satellite); and the other from 1997 to 1998 on Challenge TV.

In 2005, Sale was revived in Australia as Temptation, which was fairly faithful to the original and ran until 2009. This version in turn spun off an American version, Temptation: The New Sale of the Century, a low-budget knockoff that was canceled after its low-rated disaster of a first season.