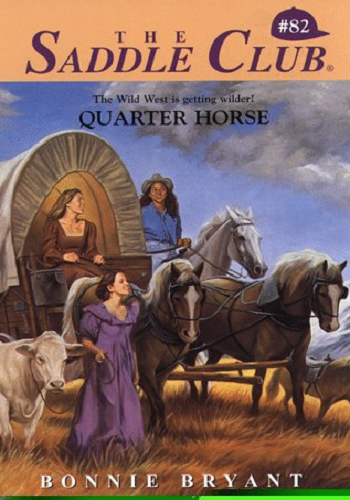 Yes, that is the 82nd book in the series, and there were 22 more.
Business-minded teens and pre-teens in the 1980s and 1990s had The Baby-Sitters Club. For the horse-crazy, there was The Saddle Club.
Advertisement:

Set in Virginia, primarily at Pine Hollow Stables, the books revolved around three good friends, Carole Hanson, Stephanie "Stevie" Lake, and Lisa Atwood. They all attend school together and share a passion for riding and horses, though only Carole and Stevie own their own. Other notable characters include their trainer, Max, and rich rival, Veronica diAngelo.

In general, Carole is the most dedicated to riding and has probably been doing it the longest. She lives with her father, an Army colonel, and owns a horse named Starlight beginning in Book 13. Stevie is a tomboy; raised with three brothers, she's more comfortable with the guys than the girls. Riding is about the only "girly" activity she enjoys. Partway through the series, her parents buy her a horse that she names Belle. Lisa is the newest member of the group. Though a year older than the other two, she just started riding and is the greenest of all. Through her, less horse-involved readers learn the ins and outs of riding and equine ownership. She started riding because her mother thought it would be proper for a lady, but eventually grows to love it. Her parents occasionally bring up the possibility of buying a horse for her, but for one reason or another it never comes to fruition.

The series spawned two spin-offs, Pine Hollow (which followed the girls at high school ages and revolved more around their personal lives than horses) and Pony Tails (aimed at younger kids, following around three younger girls from the same barn).

The books were eventually adapted into an Australian live-action series.