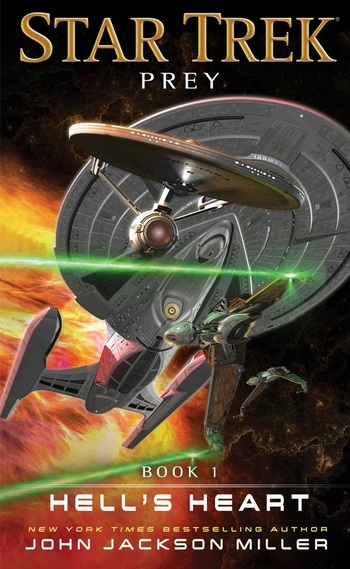 I stab at thee.
Advertisement:

Part of the Star Trek: The Next Generation Relaunch.

A series of three books (Hell's Heart, The Jackal's Trick and The Hall of Heroes) written by John Jackson Miller and released from September-November 2016, Star Trek: Prey is set after the events of Star Trek: The Fall, Takedown and Armageddon's Arrow and features both the U.S.S. Enterprise-E and the U.S.S. Titan as political intrigue and paranoia threaten to destroy the Klingon Empire from within.

2285 - Commander Kruge is dead, slain at the hands of James T. Kirk on the Genesis Planet (Star Trek III: The Search for Spock). Kruge's death throws his powerful House into disarray as various factions from within and without try to take leadership. Korgh, protégé of the late commander, is left with the remains of Kruge's various gambits and vows revenge upon both the Federation and the Empire.

2386 - The Enterprise is pulled back from her mission of exploration by Admiral Riker to ferry members of the House of Kruge to the planet Gamaral to celebrate the centennial of their triumph in the battle for Kruge's legacy, presided over by Emperor Kahless himself. However, once on Gamaral Korgh springs the trap he has spent over a century building. Now it's a race against time as Picard, Riker and Worf must unravel the secrets of the aged Korgh before Chancellor Martok's reign is torn apart.