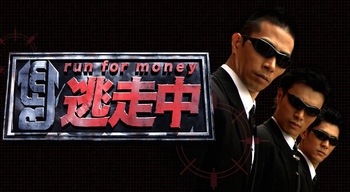 If you happen to meet these guys, do yourself a favor and just run.
Advertisement:

Run For Money Tousouchuu is a Japanese Game Show that has been airing as a series of specials on Fuji TV since 2004. It usually airs one new episode every couple months, knownin Japanese as "run for money 逃走中". As of this writing, the most recent new episode aired on January 5, 2014, bringing the total to 34 episodes.note Episode 31 (Tousouchuu Ultimate) aired as a two-parter on January 6/13, 2013. There were also 9 episodes aired not under the name of Tousouchuu aired between Episode 6 to Episode 7, which the series was integrated with other spinoffs. 32 DVD volumes are released in Japan with all the aired episodes.

It also spun off a short-lived US version by the name of Cha$e on the Sci Fi Channel and Run for Time on Hunan Television in China.

At the start of each game, contestants are set loose to roam in a set playing area, and must remain inside the area for the duration of the game. The show then releases "Hunters" into the area, paid agents whose sole goal is to chase down and tag the contestants. If a player is tagged by a Hunter, they are eliminated from the game. Breaking line of sight for a couple seconds will cause them to give up the chase - note, leading them around a pillar does not break line of sight long enough for them to stop. note Hunters are not allowed to spot players via their cameramen.Usually one game is 90 to 120 minutes in length, sometimes with the addition of a revival mission where the main game is paused and the eliminated contestants play a mini-game for a chance to re-enter the game.

Each episode gives players various "Missions" to complete during the game, each of which carries a reward for successfully completing it in time and/or a penalty for failing to do so. Missions vary widely by episode, although two types of missions are fairly common:

Rewards for success often include an item which helps the player(s) evade Hunters, expanding game area, increased money amounts, fast-forwarding the game clock by a couple minutes, while penalties for failure often include the addition of more Hunters to the game, handicaps that make it easier to be spotted by Hunters, reducing prize money, or outright immediate elimination.

Players earn money for every second they evade the Hunters, but lose it all if they are eliminated from the gamenote Sometimes, due to the result of the mission, they may return to the game, or receiving consolation prize.. Unlike the American spin-off, this ticker is actually meaningful - whenever Tousouchuu offers players a chance to leave the game, the offer is to take the money they have accumulated up to the exact second they accept the offer, as opposed to a small fixed amount. The amount of money earned per second and the total time limit differs from episode to episode; the top prize for lasting the entire game is usually around 1 to 1.5 million yen. Although, as the participants are all celebrities, bailout is widely considered as a bad option, as doing so might discredit them in real world.

Differences from Cha$e include a lack of an exit. If you are in the game when the time expires, you win the full prize. Even if you were two meters in front of a hunter about to tag you. All players remaining in the game win the full amount.

Though basically all players are on their own in most of the times, a certain level of teamwork is required at some point in the game. Many missions must be done as a team of 2 or more (sometimes everybody). Teaming up are not only useful in missions, as hunters (generally) can only capture one player at a time. If a hunter is chasing two player, one of them is likely to escape for the moment. Thus if more people remain in the game, you're more likely to succeed.

Hunters will be always on moving patrol or chase (through may take a very brief halt for looking around) through the game. They're also unlikely to patrol in areas where an active mission is taking place, especially in the final seconds of missions. However, there are times when they will show up in the mission area and players will have to flee, finding the mission interrupted. That being said, in Cha$e, hunters can chase after another nearby player right after capturing one, whereas in Tousouchuu, if a hunter is chasing after more than one player, after capturing one, they turn around and walk the other way, giving other nearby players a chance to move away, which is helpful if they still need to complete a mission.

Over time, the show has developed its own plotlines and mythology through cutscenes and occasional materials planted in the game, often simultaneously using them to explain missions. Initially, these plotlines were self-contained in each episode and simply connected together the missions in the episode, but they have since started developing into multi-episode Story Arcs.

In Episode 15 a mysterious "Game Master", which shown as behind the game, was introduced at the end. Though, the overall Myth Arc would not surface until Episode 22, which that episode revealed the the real identity of Game Master, backstory of the game, as well as some backstory of previous keywords like Chronos or hunters. The backstory setting would also share with Battle For Money Sentouchuu which premiered on May 19, 2012.

Only the cameraman (following players and hunters) can be seen in most episodes. In an unusual move for a game show, there's no traditional Game Show Host onscreen; the closest the show gets is Game Master Satoshi Tsukimura, who is only occasionally seen and generally does not interact directly with the players.

The official site is seen here