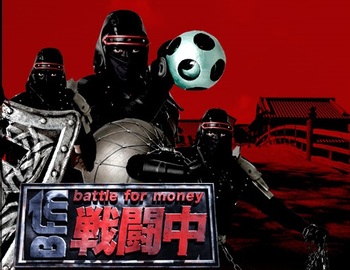 Ninjas with a shield, a dodgeball and a Kusari-fundo. Rule of Cool or trouble waiting to happen.note In BFM, the Kusari-fundo is usually equipped with a ball.
Advertisement:

Japanese Game Show and Spinoff from Run For Money Tousouchuu, having a shared Mythology. It's known officially as "battle for money 戦闘中". As of 2019, eight DVD volumes are released in Japan with all the aired episodes.

At the start of the game, each player is given 250,000 yen and a ball. They will have 100 minutes to find other players and eliminate them by hitting them with a ball.note Female players are given a shield to compensate for their disadvantage against male players Eliminating another player earns the eliminator their money. The game ends when there's one player left standing(, in which case they will win the grand prize,) or time runs out(, in which case nobody wins anything).

The show incorporated elements of The Legend of Zelda (spending part of your fund on allies and tools), and its parent show (missions for rewards). It also had two licensed games, consisting of Chou Tousouchuu Atsumare Saikyou No Tousousha Tachi and Chou Sentou Chuu Kyuukyoku No Shinobu To Battle Player Choujou Kessen.

The official site is seen here

This Show Provides Examples Of: