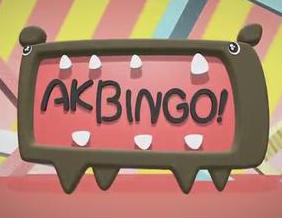 Aitakatta!!
You know those memes of two Japanese girls blowing a cicada (not a cockroach) through a glass pipe to each other? They're from this show.
Advertisement:

AKBingo! is a long-running Japanese television Variety Show featuring idol group AKB48, aired weekly with that title from October 1, 2008 until September 24, 2019 on Nippon Television. In each episode, members from AKB48 and sometimes the sister groups participated in activities that included quizzes, games, interviews, and news.

The first two seasons of the show were respectively titled AKB 1ji 59fun and AKB 0ji 59fun, the numbers referring to its time slot. The first episode of the former was aired on January 24, 2008, which is considered the starting date of the show as a whole.

The Sakamichi Series groups have adapted comparable shows with NogiBingo!, KeyaBingo!, and HinaBingo!. There have also been spinoffs for the sister groups, such as SETOBINGO for STU48 and HKTBINGO for HKT48 in 2018, and SKEBINGO for SKE48 slated to air in 2019. Their Chinese sister group, SNH48, has "SNHello!" which premiered in 2014.

The hosts of the show were the owarai comedy duo Bad Boys (Ōmizo Kiyoto & Sata Masaki), until they were succeeded after 395 episodes by Woman Rush Hour (Muramoto Daisuke & Nakagawa Paradise) on 28 June 2016.

On episode 555, broadcast on August 20, 2019, it was announced that the show would end in September, following a string of cancelled AKB shows and events that year (AKB48 Show! on NHK, All Night Nippon radio show, Senbatsu Elections, Janken Tournament, etc.). Episode 560, the final episode filled with highlights from the show's 11-year run, was aired on September 24. This was all due to new management at AKB.

In January 2021, a revival of the show, titled AKBINGO NEO, was announced. The participants were decided through special events in the mobile game AKB48 Dobon!, in which fans (and the members themselves) played to contribute points to support their favorite members. The first episode was aired on March 30 on BS Nippon (Nippon TV's satellite channel) and two more episodes were aired as special programs that year.

In April 2022, another revival titled AKB48 Sayonara Mouri-san was launched on Nippon TV. It's planned to be a regular show like the original and hosted by Shimofuri Myojo (Seiya and Soshina) and former AKB48 member Minegishi Minami.

Episodes of the show are available to stream on Hulu Japan, which has a partnership with Nippon TV. The cable channel Gems TV Asia, co-owned by Nippon TV and Sony Pictures, would also rerun the last seasons of the show starting January 24, 2019.

Episode guides are available from Stage48

Wikipedia. There are also many, many episode recaps you can look up.

For consistency, East Asian names follow the convention of that region (surname followed by given name).

To be honest, AKBingo! provides examples of the following tropes: