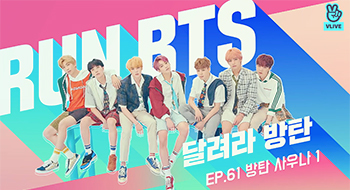 The show's current Title Sequence.
Run BTS is a Variety Show featuring the members of Korean Pop Music band BTS. The guys divide into different teams and play a wide variety of games against each other. There are often prizes and punishments for the winning and losing teams.
Advertisement:

New episodes are released weekly on the online platform VLIVE