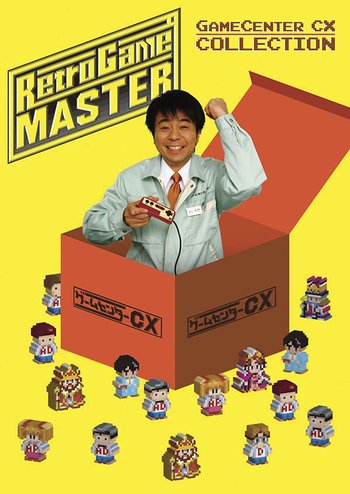 Retro Game Master, known in Japanese as GameCenter CX, is a TV series starring Shinya Arino, one half of the Japanese comedy duo Yoiko, who attempts to play through some of the most beloved (and most challenging) retro video games ever made, all to document their endings.

Arino, who is presented as a Kachō (section chief) of the fictional GameCenter CX company, is given a time limit within which he must complete the game, but he isn't the most skilled player around. When he gets stuck or needs advice, he can ask his fellow "staff" memebets (AD or Assistant Director) to help him out (usually in the form of playing through previous levels while Arino takes a break after losing a life, or offering a strategy for beating an enemy). Arino doesn't always complete his challenge, but he still manages to stay positive even when he's losing badly.

The first season's episodes profiled a particular company or game series and featured Arino's game challlenge as a side feature. From the second season on, the game challenge became the main focus, although the show would still cut away to show Arino doing things like visiting game arcades, interviewing developers, and so on.

A few DVD box sets have been released in Japan; these are collections of selected episodes rather than season sets. In 2011, the Arino's Challenge segments from twelve episodes were once available for US viewers to watch on gaming blog Kotaku.com

, but they since lost the rights and have taken them down

. The episodes were then re-released

with new subtitles from zari-gani of the SA-GCCX Team and English and Japanese language tracks for the announcer.

The show has produced a feature film called Game Center CX The Movie 1986 Mighty Bomb Jack. The show also hosts concerts with game music and had special episodes set in USA, France, Cambodia, Vietnam and Russia, where Arino plays a game live in front of hundreds of people. From 2015 Arino and Masaru Hamaguchi (another half of Yoiko) regularly appear in commercials for Wii and later Nintendo Switch games labeled "GameCenter DX", including a spin-off series called "Yoiko's Minecraft Survival Life".

The show also has spawned two video games for the Nintendo DS and, the first of which was released in North America as Retro Game Challenge. A third game has been released for the 3DS, but it was handled by a different developer and has a completely different game structure.