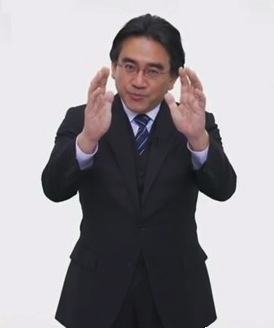 "On my business card,
I am a corporate president.
In my mind, I am a game developer.
But in my heart, I am a gamer."
"Even if we come from different sides of the world, speak different languages. Even if we eat too many chips, or riceballs. Even if we have different tastes in games. Every one of us, here today, is identical. In the most important way. Each one of us has the heart of a gamer."
Advertisement:

He started at HAL as a staff programmer, and helped create the first Balloon Fight and Kirby games. More notably, he single-handedly reprogrammed EarthBound from scratch midway through development, rescuing the entire project at a time when all seemed lost.

Iwata's tenure as head of HAL Laboratory did not slow down his developer skills; he was responsible for porting the battle code from Pokémon Red and Blue to Pokémon Stadium, and when development of Pokémon Gold and Silver came to a halt due to memory issues, he was able to compress the code so efficiently that it could fit an entire second region. In fact, Iwata is a large part of the reason why the franchise was able to become the worldwide smash hit that it did, as he campaigned for the localization of Pokémon Red and Blue when Game Freak was reluctant.

After attaining a high ranking position as Nintendo's head of corporate planning in 2000, Iwata became its global president two years later after Hiroshi Yamauchi went into retirement. Both the Wii and Nintendo DS were promoted under his leadership with absolute full backing. He then served as the executive producer of all Nintendo software, including outsourced projects.

Iwata's identity as Nintendo's global president was cemented through Iwata Asks, where he interviewed key designers for upcoming games released on the Nintendo platform and as the host of almost every Nintendo Direct during his lifetime, which announces new games and information. He also garnered a public image as an endearing Bunny-Ears Lawyer, with an eccentric and esoteric style of humor (most famously embodied by a prerecorded segment

during E3 2012 where he stared at a banana bunch in his hand before stiffly turning to the camera, all silently and without breaking his stern composure once) and knack for defying convention that captivated audiences and led to Nintendo coming off as a more outgoing and self-aware entity compared to the increasingly static image they developed under Yamauchi's tenure.

However, while revered now, it's important to note for historical purposes that Iwata was a highly controversial figure in his time. This is largely owed to his Blue Ocean strategy, which emphasized focusing on products that tapped into previously unconsidered markets, leading to the creation of the aforementioned Wii and DS. While it led to success for Nintendo and allowed them to carve a memorable new niche at a time when they were struggling to make an impact against the juggernauts that were Sony and Microsoft, hardcore gamers considered the strategy alienating towards themselves, due to it placing a heavy focus on accessibility and casual gaming at the cost of reduced technical power and familiarity. Others, meanwhile, argued that Nintendo's move outside of the hardcore crowd and mainline console war was ultimately beneficial by allowing them to continue as a distinct entity separate from the conventional PlayStation/Xbox/PC race.

Iwata himself seemed to realize this divisiveness, and aimed to make the Wii's follow-up, the Wii U, more appealing to hardcore gamers in addition to maintaining the casual niche the Wii had previously found success with. However, the console's poor performance (brought about in hindsight almost entirely by its downright embarrassing marketing) only seemed to galvanize detractors, and following Nintendo's poorly-received presentation at E3 2015, there were calls for him to resign.

Iwata, however, had far more serious issues to contend with — life-threatening ones, to be precise. A bile duct growth forced him to miss E3 of 2014 and is believed now to be the reason for the puppet show for Nintendo's 2015 E3 event, so that people would not have to see him in such a badly deteriorated state of health. When Iwata was later seen in-person during Nintendo Directs and press meetings, the media noted his far more gaunt and frail appearance

◊ as a result of cancer-induced tissue damage. Iwata seemed to take it in stride, however, publicly announcing that he had altered his official Mii avatar to reflect his weight loss and even taking official company portraits showcasing the change, an especially unprecedented and shocking move in Japan, where cancer is seen as a highly taboo topic of discussion. Despite undergoing surgery to remove the growth in 2014, it later resurfaced in June of 2015 and ultimately cost him his life on July 11th that same year

Iwata was succeeded first by former Nintendo of America CEO Tatsumi Kimishima and later by former Pokémon Company executive Shuntaro Furukawa, both of whom sought to continue Iwata's Blue Ocean strategy via his final hardware project, the Nintendo Switch. Following his death, Iwata's formerly divisive reputation became much more unanimously positive, owing to information about his prodigious programming skills, his earnest care for Nintendo's well-being, and especially his One of Us status as a fellow video game fan becoming more and more publicly available. Nowadays, he's widely considered one of the greatest visionaries in the gaming industry since Shigeru Miyamoto, with many of his former detractors regretting their previous disdain for his tenure. Iwata was later posthumously awarded the Lifetime Achievement Award at both the 2015 Golden Joystick Awards and the 2016 DICE Awards.

Works Iwata was personally involved in:

This page is dedicated to our wingman who fell in battle.