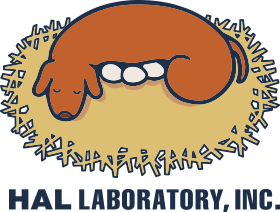 Dream Hatcher, a.k.a. Inutamago (犬たまご, "Dog Eggs")
HAL Laboratory, Inc. (株式会社ハル研究所 Kabushiki gaisha Haru Kenkyūjo) is a long-time Nintendo affiliate company (though like Intelligent Systems and Game Freak, they are an independent company not owned by them) that originally started in 1980 as PC developers for VIC-20 and MSX, but from Famicom and onwards went completely Nintendo-exclusive.
Advertisement:

Starting as a coding and porting factory at first, as time went on, HAL began to create its own IPs, which all ultimately ended up under the Nintendo banner — with the exception of titles developed by their mobile branch, HAL Egg. They're primarily known for the Kirby franchise, which they co-own with Nintendo via the joint venture "Warpstar, Inc." They also provide development support to other Nintendo projects, including their firmware.

Despite how it looks always capitalized and all, "HAL" isn't actually an abbreviation for anything. It was just named that because "each letter put them one step ahead of IBM". Their current corporate logo is the "Dream Hatcher," which was designed by Shigesato Itoi and represents "incubating ideas that hatch into incredibly fun games". The logo is often included as an Easter Egg within their works, alongside their Goroawase Number, 86.

Notable staff from this company include Masahiro Sakurai, the creator of the Kirby and Super Smash Bros. series who went independent in the mid-2000s; the late Satoru Iwata, a programmer who later became HAL's president and eventually the head of Nintendo; and Shinya Kumazaki, the current general director of the Kirby series.

Games made in part or whole by HAL Laboratory:

Games made by HAL Egg: