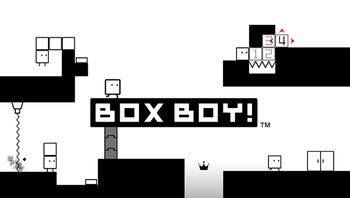 BoxBoy! is a series of of Puzzle Platformer games created by HAL Laboratory.

The games follow Qbby, a square-shaped alien being with the power to create boxes out of his body, and his friends on a myriad of quests to save his planet and the universe as a whole from a mysterious black mist. Games in the series include: