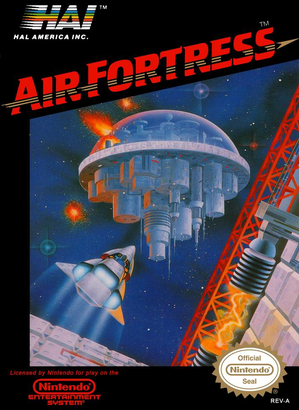 "The game does not give much more plot than this, but it quickly becomes clear that one is to destroy the Air Fortresses, and really, in the world of NES games, this is an adequate substitute for actual motivation."
— El Sandifer

Air Fortress is a game released in Japan in 1987 by HAL Laboratory, today best known for Kirby and Super Smash Bros. It came to American shores in 1989. Its basic plot will remind you of the climaxes of a few Star Wars films: The planet Farmel finds itself threatened by eight mysterious Air Fortresses (something of a misnomer, as they're attacking from space). The Federation of Intergalactic Powers has thrown all their defenses at the Fortress to no avail. Now, it's been decided that one man, Hal Bailman, will attempt to infiltrate and blow up the Fortresses from the inside.

The gameplay of Air Fortress combines two genres, and can be said to be composed of three separate parts. The first part of a given level is a Shoot 'em Up where you're trying to get inside the Fortress in question. On your way, you also want to gather as much Energy and Crash Beam Bullets... err, Bombs, as possible. These will all come in handy in the second part of the level.