Series / Some Mothers Do 'Ave 'Em 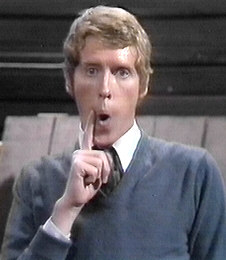 Uh-oh, we're in trouble/Something's come along and it's burst our bubble.
Advertisement:

Some Mothers Do 'Ave 'Em was a British Sitcom that originally aired on The BBC from 1973 to 1978, starring Michael Crawford as the hapless, accident-prone Frank Spencer. It was written by Raymond Allen, based on his own experiences as a single man. However, upon seeing the first draft for the script, Michael Crawford insisted that Frank have a wife. Michele Dotrice was then cast as the long-suffering Betty.

The series saw the well-meaning but disaster-prone Frank Spencer get himself into sticky situations, often causing someone else to break down or causing an unintentional path of destruction. Usually the episodes contained a character who is familiar with Spencer warning another character about working with him, but Frank always proves to be more of a burden than initially feared.

The series also focussed on Frank's role as a family man. Hence, it featured a Story Arc where Betty becomes pregnant and eventually gives birth to a girl, Jessica.

Episodes generally include stunt work performed by Crawford himself, often highly physical, that today would be unusual in an inexpensive half-hour Sitcom. With such a denouement in mind, typical plot lines involve picnics on high cliffs, driving lessons by the sea, household repairs, or a wide variety of new jobs such as motorcycle courier or high-rise window cleaner.

It returned for a sketch in 2016's Sports Relief telethon, with the 74 year old Crawford still doing his own stunts, as he attempted to get to the London Velodrome to see Jessica (now an adult) take part in a cycle race.

It was voted #22 in Britains Best Sitcom.