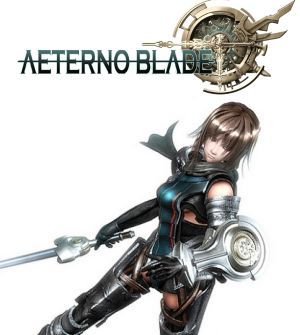 AeternoBlade (known as Time Avenger in Japan) is a 2D Metroidvania-style platformer created by Corecell Technology and released for the Nintendo 3DS, Playstation Vita, Playstation 4, and the Nintendo Switch.
Advertisement:

In the region of Awelsia, vengeful Freyja travels with an unknown weapon called "AeternoBlade" to take revenge from Beladim, the Lord of the Mist who destroyed her village, Ridgerode, and killed her tribe. Her vengeance is helped by Vernia, who has as much merit as Beladim. Vernia taught Freyja about the ability of AeternoBlade.

Freyja has to venture in many world dimensions to find how to annihilate Beladim.

AeternoBlade provides examples of the following: