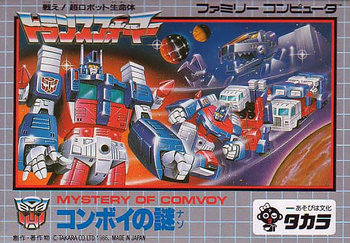 Transformers: Convoy no Nazo (or "Mystery of Comvoy," as the subtitle is translated on the cover) is a side-scrolling and vertical-scrolling Platform Game for the Nintendo Family Computer, based on characters from Transformers: Generation 1 note "Convoy" is the Japanese name for Optimus Prime. It was originally released in 1986 by Takara, in Japan only.

The plot — minimal as it may be — centers on Ultra Magnus attacking various Decepticon strongholds to find out who killed Optimus Prime. As The Transformers: The Movie wasn't released in Japan until 1989, the circumstances of Prime's death prior the third season of The Transformers (dubbed in Japan as a separate series entitled Fight! Super Robot Lifeform Transformers 2010) weren't very clear to Japanese audiences at the time.

with the Diamond Black version of Alternity Megatron, which tied in with this game by establishing it as a proxy war - a "game full of death and suffering" - between an Optimus Prime from one dimension (using Ultra Magnus as his champion) and a Megatron from another dimension (sharing his power with the Decepticons of that era). TFWiki acknowledges that this may be one of the greatest instances of Fan Wank ever.

In late 2014, the game was adapted as an Endless Running Game for mobile devices to tie in with a line of Super-Deformed Transformers figures. This game, Q-Transformers: Kaettekita Convoy no Nazo (Mystery of Convoy Returns), was further accompanied by a series of online animated shorts under the same title, in which the Q-Transformers have various fourth-wall shattering conversations about the quirks and reputation of the game and the franchise as a whole.