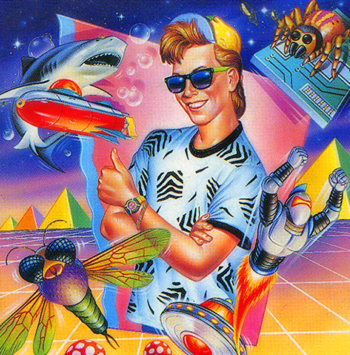 You wish you could be as 90's as this kid.
Advertisement:

Treasure Master is a Platform Game for the Nintendo Entertainment System in 1991, developed by Software Creations and published by ASC Games.

You play as a nameless protagonist who explores different worlds. The gameplay revolves around collecting items and gathering treasures. Some of the items serve a practical purpose, like bombs that blow away barriers, or a remote control that operates machinery, to allow access to other parts of the level. The hero can also use different gadgets and equipment that enhances his abilities.

The game was released to coincide with an actual contest held by MTV. Players received a special code to unlock the sixth and final level, and had several months to practice beating the game until April 11th, 1992, at which point they had until midnight to beat the game as well as the secret world. At which point they would receive a 24-character code that could be entered by calling the special hotline, and players would receive on of the many 36,000+ prizes. With the contest's days long since passed however, Treasure Master still has enough gameplay on its own to stand out. An exciting soundtrack done by renowned chiptune composer Tim Follin helps out a lot with keeping its relevance.