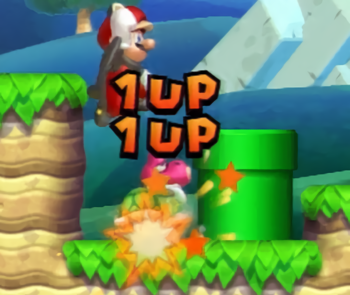 Repeat until bored and/or out of time.
1-Ups are a good thing in many games; with a limited number of Video-Game Lives, you'll need some extras just in case if you want to get through the game in one sitting. Some game designers, however, don't know when to quit giving you opportunities to earn them, and create an Infinite 1-Ups, an incredibly easy (if sometimes tricky) way of gaining an infinite amount of life which makes the game far easier than it should be.
Advertisement:

Typically, this'll be some sort of Guide Dang It! infinite loop combo that would rack up extra lives like crazy, but Infinite 1-Ups can be used to describe any instance where you're able to gather an insane number of extra lives, through gimmicks or no. This trope can cause the game to have Meaningless Lives. On the other hand, a really Nintendo Hard game can eat through even the lives gained by this, since the life counter is going to reach a Cap sooner or later.

See also Bragging Rights Reward, which Infinite 1-Ups is if performing it is harder than surviving anything in the game.

This can happen either by design (an Easter Egg or a reward for pulling off some challenge the game designer thought would be incredibly difficult), or by accident due to a Good Bad Bug.

Alternative Title(s): One Up Sampo, Infinite One Up, One Up Farming, Infinite Lives, Infinite 1 Ups