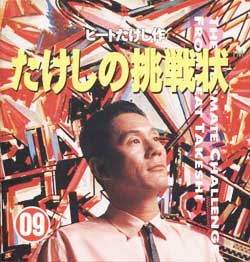 "You just haven't been performing lately."
"This game is made by a man who hates videogames."
— Intro text
Advertisement:

Takeshi no Chousenjou (Takeshi's Challenge) was a 1986 troll Video Game on the Famicom, made by Taito under the direction of Japanese comedian and film director Takeshi Kitano, known as Beat Takeshi. The player controls a despondent salaryman that must go through a lot of tribulations to find great riches.

The game does anything it can to annoy the user, such as making them sing with the second controller's microphone, press a button for hours, hitting the same enemy thousands of times... all while being attacked by hard-to-avoid enemies. The player can beat people up, get fired and divorced, drink until he passes out, and learn new skills.

The game sold 800,000 copies in its lifetime and was made available in Japan's Virtual Console for the Wii in 2009. It also got a re-release for iOS and Android in 2017.

The game has a Wide-Open Sandbox world and Immersive Sim elements, and allows players to get up to all kinds of shenanigans in an urban city, making it like a distant precursor to something like Grand Theft Auto.

"What would you do if a game like this were serious?"