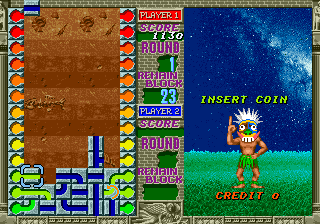 Tube-It is an Arcade Puzzle Game released by Taito in 1993. It was originally released in Japanese arcades under the name Cachat.

During the game, blocks of straight, curved, plus-shaped, or t-shaped pieces fall from the top of the screen. The goal of the game is to align the blocks so a path is created from one electrode to another, either on the same side or the opposite side. The player uses the joystick with a button to rotate the blocks and drag the block left or right. You can also drag a block from beneath other blocks.

If the blocks reach the top of the screen before you can complete the circuit, the game is over. The game has ten levels.