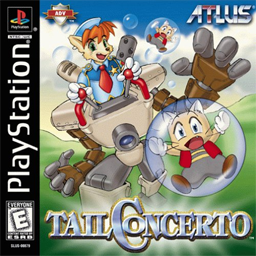 The very first game developed by CyberConnect2 and the one that kickstarted the Little Tail Bronx series as a whole.

Tail Concerto is a 3D anime-style Action-Adventure and platform game for the Playstation, published by Bandai in Japan in 1998 and by Atlus in North America in 1999.

The game revolves around a canine police officer named Waffle Ryebread and his adventures while he obtains magical crystals for the purposes of an investigation into their use. However, he constantly runs into the Black Cats Gang who is bent on stealing the crystals for their boss, Fool. The group is helmed by Alicia, a girl Waffle knew as a child. What either doesn't know is the unfortunate implications the crystals bring if they are ever reunited...

A mostly underrated game that has a small following. A Spiritual Sequel to the game set in the same universe, Solatorobo: Red the Hunter, has been released on the Nintendo DS the 28th of October, 2010, and a third game, Fuga: Melodies of Steel, was released on July 29, 2021.