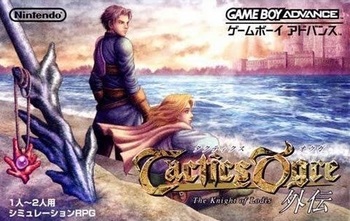 Tactics Ogre: The Knight of Lodis is a 2001 video game, a Gaiden Game for the Game Boy Advance based on the popular Ogre Battle series. The story follows a young Knight of Lodis named Alphonse Loeher, in his best friend Rictor Lasanti's military unit, the Order of the Sacred Flame. He is sent to an island called Ovis. Ovis is divided by conflict thanks to an aggressive push of Lord Batraal, living on the north of the island. Alphonse is separated from the rest of his unit, and begins to uncover a sordid plot opposing the pope and the empire of Lodis over the fabled Spear of Destiny and the possible resurrection of a fallen angel.

Like the previous Tactics Ogre, this is an isometric view turn based strategy game.

'Tactic Ogre: The Knight of Lodis contains examples of: