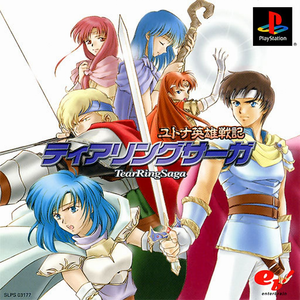 TearRing Saga: Utna Heroes Saga is a 2001 video game created by Shouzou Kaga, the creator of the Fire Emblem series, fresh from leaving Intelligent Systems to form his own company, Tirnanog. Unsurprisingly, TearRing Saga is considered to be a Spiritual Successor to Fire Emblem and incorporates the vast majority of that series' gameplay, mechanisms and general flavouring.

The game is about the continent of Lieberia being terrorized by an evil cult, hell-bent on reviving their dark god. Runan and Holmes, the two heroes of the game, travel the continent to stop the cult before their ambitions are realized.

Notoriously, it proved a bit too similar to Fire Emblem for Nintendo's liking, and they took Tirnanog and publisher Enterbrain to court over it. The latter was found guilty of violating unfair competition laws but not copyright infringement — fortunate, given Kaga's original plan for the game (named "Emblem Saga" and revised mid-development) was full of Fire Emblem references and even recurring characters. The rest of the lawsuit was settled out of court, and since then those involved seem to prefer not to discuss the matter.

It got a 2005 sequel for the PlayStation 2, Berwick Saga, which did an excellent job of further differentiating it from its Fire Emblem ancestor and making itself its own beast (no doubt due to the above).

In 2019, Shouzou Kaga released another Spiritual Successor to Fire Emblem (and consequently these games as well) called Vestaria Saga I: War of the Scions.

You can grab the translation here!