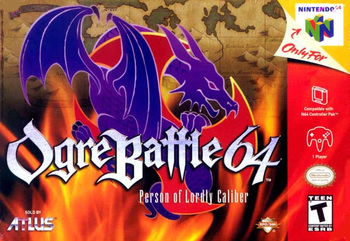 The third game released in the Ogre Battle line (yet stated to be the "sixth" in the story canon), Ogre Battle 64: Person of Lordly Caliber was released on the Nintendo 64 in 1999 (Japan) and 2000 (North America). It goes back to the Real-Time Strategy style of game play that the first game in the series has and away from the similar to Final Fantasy Tactics gameplay that Tactics Ogre was.
Advertisement:

The game takes place in Palatinus (north of Zenobia) and stars Magnus Gallant, a young nobleman who, instead of choosing to stick around the wealthy Central Division and live a life of ease in nobility, decides to make a name for himself by joining the military academy and eventually be recruited into the Southern Division army. What starts as Magnus merely trying to quell some rebels turns into a full blown revolution of the Palatinus kingdom, striking back against the Lodis Empire, and even prevent the second Ogre Battle.