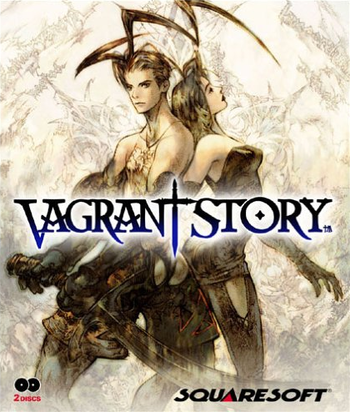 "I am the reinforcements."
The body is but a vessel for the soul,
A puppet which bends to the soul's tyranny.
And lo, the body is not eternal,
For it must feed on the flesh of others,
Lest it return to the dust whence it came.
Therefore must the soul
Deceive, despise and murder men.
— A. J. Durai
Advertisement:

Squaresoft's Vagrant Story is a PlayStation RPG by video game auteur Yasumi Matsuno. It is available as a downloadable PSOne Classic on the PlayStation Network.

Vagrant Story is the tale of Ashley Riot, a knight who works for the kingdom of Valendia during the dark ages of Ivalice. He is one of the Parliament's elite Riskbreakers, a One-Man Army trained for the most dangerous black-ops and infiltration missions.

When a seemingly immortal cult leader named Sydney Losstarot kidnaps the son of the powerful Duke Bardorba, Ashley is sent to infiltrate the lost city of Leá Monde, assassinate Sydney and recover the boy. The Priesthood of St. Iocus, a political rival to the Parliament, have also taken a strong interest in the evil powers lurking within Leá Monde, and have dispatched their own private army to capture Sydney. Leading these "Knights of the Cross" is Romeo Guildenstern, a pious but sinister paladin.

In the style of classic dungeon crawlers, the player takes Ashley through Leá Monde's catacombs and ancient temples, killing vast quantities of equally-ancient monsters along the way. The plot unfolds rapidly as new parties enter the fray and a cat-and-mouse game ensues: as Ashley tails his mark through the catacombs, Sydney probes Ashley's lost memories and teases him with the inconsistencies he finds.

The game is easily one of the most complicated Squaresoft RPGs: a combination of 80's dungeon crawling with French graphic novel aesthetics, Shakespearean dialogue, elaborate Item Crafting, Rhythm Game combat and the structure of a Greek drama, with the characters dressed in... well, fairly homoerotic bondage gear. It's a gorgeous and Nintendo Hard game which features very mature themes compared to other Final Fantasy installments. And its English version has what's probably the most celebrated localization in video game history.

Vagrant Story's battle system is closer to NetHack than it is to most games in the Final Fantasy series. Instead of gaining traditional experience points, Ashley — also a skilled blacksmith — crafts a collection of weapons and a full set of armor, planning around elements, weapon types, weapon range, creature types and Ashley's own reaction abilities. In practice, this means the player may want to re-configure their equipment for every new enemy they encounter.

Also, a warning for first time players. There are four opening movies that are very easily skipped by accident. Without seeing these sequences, the game makes very little sense. The scenes are:

So, don't press start until after you see the first save point.

See also Crimson Shroud, a Spiritual Successor that shares some of the same terminology and lore.