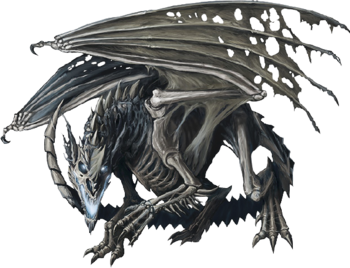 Often the most badass type of undead, dracoliches are never to be taken lightly. They are always heavy hitting monsters, if not outright bosses. Any Necromancer should do well to seek to have one, or outright become one. It's not a rare thing, however, for these dragons to be weaker than their regular, living counterparts as they inherit the weaknesses of The Undead like Revive Kills Zombie while dragons rarely have such exploitable flaws. But in some cases, they might instead be literal liches, where so long as their Soul Jar is undamaged, they are Nigh-Invulnerable, making them stronger than regular dragons.

Often the dragon's classic fire Breath Weapon will be turned into a poison breath or ice blast when they become undead. If it remains fire, expect some form of Technicolor Fire - blue and green being popular picks.

A specific type of Non-Human Undead and Undead Abomination. Related to Draconic Abomination. May overlap with Undead Fossils in cases of Dinosaurs Are Dragons.