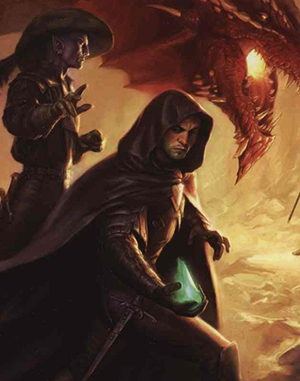 Entreri and Jarlaxle on the cover of Servant of the Shard
The Sellswords is a book trilogy by R.A. Salvatore that focuses on the stoic human assassin Artemis Entreri and the opportunistic dark elf mercenary Jarlaxle. A spin-off of Salvatore's Drizzt novels, these novels are different from Salvatore's usual Forgotten Realms novels in that it stars a duo of Villain Protagonists.
Advertisement:

Servant of the Shard takes place in the southern city of Calimport, where Jarlaxle's mercenary band Bregan' D'aerthe seeks to expand their influence to the surface. They kill one of the most influential Pashas of the city and install Artemis Entreri as their new front. However, since Jarlaxle got his hands on the Crystal Shard Crenshinibon in Paths of Darkness, it has been influencing his thoughts, leading him to make some questionable decisions that draw the ire of his lieutenants.

In Promise of the Witch King Entreri and Jarlaxle venture north to the Bloodstone Lands of Vaasa, where they plan to work and live for a while. While head-hunting for goblin ears, Jarlaxle, newly endeared to the surface world and always driven by the chance of acquiring more wealth, finds out about an old magical castle in the northern wastelands. The two of them join an adventuring party that plans to loot the castle and destroy the lingering presence of the lich known as the Witch King.

Still in the Bloodstone Lands, Road of the Patriarch has Jarlaxle planning to set up beneficial trading connections for Bregan D'earthe in the northern land. Curiously, he plans to do this by establishing his own kingdom from within the old castle of the Witch King, setting up Entreri as the new King and thus aggravating the nearby reigning Paladin King Gareth Dragonsbane of Bloodstone.

Chronologically the books take place somewhere between Paths of Darkness and Transitions, as Jarlaxle is out of the focus of the main Drizzt novels for that time period, before returning in The Pirate King. Entreri is not seen again until The Neverwinter Saga but then returns as a main character.

This series provides Examples Of: