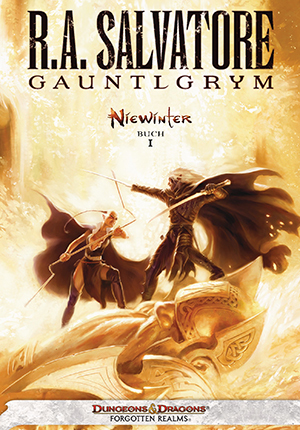 Dahlia and Drizzt in Gauntlgrym
The Neverwinter Saga is a sequence of four books written by R.A Salvatore and is the seventh entry in his long-running The Legend of Drizzt series. It is chronologically preceded by Transitions and followed by Companions Codex.
Advertisement:

Gauntlgrym begins with King Bruenor Battlehammer abandoning his office in Mithrall Hall and go journeying in search of the eponymous ancient dwarven city. He is, however, not the only one coveting the stronghold: the young elf Dahlia Sin'felle seeks a way into the city to cross the plans of Thayan ruler Sazz Tam in his endeavor to create a Dread Ring, an area that will produce undead for him. She hires the mercenaries Jarlaxle and Arthogate to help her find Gauntlgrym.

In Neverwinter Drizzt and Dahlia are on their way to Neverwinter Wood, where the sorceress Sylora Salm is trying to further the Thayan cause, which Dahlia tries to prevent. Nearby, in the city of Neverwinter, Herzgo Alegni is searching for a lost flying fortress and spends his freetime terrorizing his magically bound slave Barrabus the Gray.

Charon's Claw sees Drizzt, Dahlia and Barrabus travel once again to ancient Gauntlgrym so that they may destroy the sword Claw in the forges' fires. Barrabus hopes this will end his enslavement by the sword and looks forward to end his torment - and his life. Meanwhile in Menzoberranzan House Xorlarrin sets out to build a new drow settlement with the blessing of Lolth. The members of House Baenre have their long fingers in this plan aswell: their youngest and most promising male, Tiago, has contracted a legendary drow smith with magical weapon designs to accompany him to the forge of Gauntlygrym.

The final novel The Last Threshold concerns Drizzt's search for his lost companion Guenwhyvar, who is held captive by the Netherese Warlock Draygo Quick. One of Quick's pupils, the half-Tiefling Effron is also interested in Drizzt's new companions, because he seeks vengeance against Dahlia Sin'felle.